In a wooden framed house, termites and leaking water have long been the enemy. Today we have water proof membranes and pest control, but in the early Qing dynasty one could but build a house well and take good care of it. This policy saw ours through Centuries, until political revolution and building neglect allowed these enemies at the gate a toe in the door. In our case, they had attacked the corner joint of our main beam, a booming 8 metre long piece of Asian red maple supporting half of our house, and would need to be changed. After we took down a smaller sub beam, we saw the inside was hollowed out by termites (picture below) and feared for the worst as we looked at its big brother still holding half the house up a few metres away.

Main beams in a Huizhou house are 驼背 (tuobei) or hunchback in shape; Qing architecture called for elegant, bowed and curved lines. The largest of these sits in our entrance hall, a place designed for ancestral worship. This two-storied hall was spacious, grand and elaborate and demanded a fitting grand beam to match. Our replacement timber is a local pine, delivered to the village on a truck, 8 metres long and the best part of a metre in diameter. From here, it had to be dragged down the narrow alleys of the village on wooden rollers, up and over our garden wall and into the house. Mr Luo’s old kitchen door in the side of our house was unfortunately too small for this, and subsequently lost a fight with a big hammer. Once safely ensconced within our hallway, the carpenters could go to work trimming it to the traditional ‘hunchback shape’. Their weapon of choice: a single sided, sharp-as-you-like axe, hacking into the side of the tree trunk by eye. Final shaping is done with a plane, which despite looking decidedly home made in someone’s shed, again has a blade that could slice a mosquito in half.

Carving Out Our Niche

Master Jiang’s OAP-carpentry team work quickly and hassled us for when they could switch this new beam for the old one. Unfortunately, they would have to wait. Yuzong and his wood sculptors first needed to carve the elaborate decoration into it for which Wuyuan houses are so famous. The original owner had only carved the underside of the beam, with flowers and birds in homage to the village’s surroundings and Chinese knots to convey peace and longevity. Yuzong’s first job was to send his apprentices up to the old beam as it sat in the roof with tracing paper, to capture the details of the old beams carved underside and then transpose this to the new beam on the ground.

With the new beam on the ground and ready to carve this image from our old beam, Yuzong looked unsatisfied. The issue, he sighed, was the original owners hadn’t carved into the side of the beam (just the bottom), and so it would look ‘a little plain’. Other houses in the area famously feature elaborate military victories, scholars and government mandarins in celebration of the original owners. His understanding of the job, and payment we had given him, was to include such a carving. We are not sure why the previous owners had not done so; they were clearly not short of money. Perhaps the odd shape of our house dictated one enters this grand hall from the side, instead of straight on so it wouldn’t be readily visible. I wrestled in my head with the implications for preservation architecture. In adding on something that wasn’t previously there, it was decided we couldn’t carve in ‘pretend’ stories of old, but should instead add our chapter to the story in a fitting and tasteful way. It is, as they say, ‘the business of the wealthy man to give business to the artisan’. Whilst we are far from wealthy (and have bank the debts to testify…) we are relatively prosperous for this area and can fund Yuzong’s team to do their wonderful work. Work we hope will last for centuries more to come, with the same hand carved techniques that have been used for countless generations past. Around Yuzong’s dinner table one night, we set about designing our story to go onto the side of the new beam.

The end product was one of our romance – Edward, a Chinese vision of a stereotypical Englishman in a top hat and big Western nose, gazing at Selina, the Chinese beauty, meeting across a bridge of birds by moonlight. This is the medieval Qixi story, feudal China’s Romeo and Juliet, with a little artistic license added by us. These two moonlit lovers were originally kept apart by their families, but then brought together by the local birdlife. Selina and I, across the oceans by China Eastern Airlines. For the carving, the birds won the day. Edward sits on the West end of the beam, and Selina the East, capturing what we hope is the best of our 中西合璧 (ZhongXiHeBi/East-meets-West) story. Symbols of Ed’ s past include an English rose, Oak acorns and the Manx flag (the Gawne homeland), whilst Selina is surrounded by the ‘Four Noble Ones’: plum blossom, orchid, bamboo and chrysanthemum sitting above a PLA flag (she was born on an army base). Finally, a Dragon and Phoenix surround us both as symbols of male and female coming together in marriage.

Yuzong and his team of apprentices worked well into the night for over a few weeks on this one piece of work. The end result is breath-taking. Yuzong himself found the whole thing completely normal, but for us it feels utterly surreal seeing ourselves ensconced in wood, next to stories of feudal China, frozen in time. For now, it still has protective sheets around in whilst work continues, full photos to follow in due course. Take a peek below at Yuzong’s drawings and Selina and myself, hand carved in all our glory. 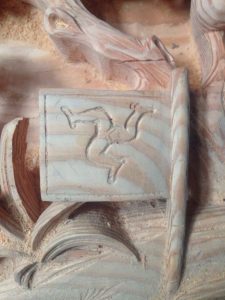 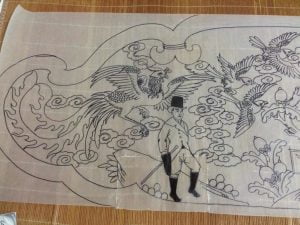 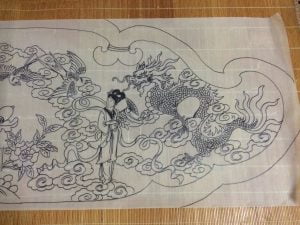 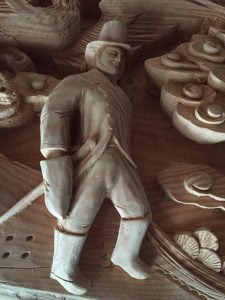 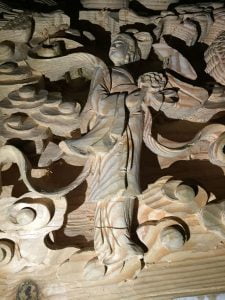 The Changing Of The Guard

Finally, it was time for master Jiang to wake his snoozing geriatric carpenters into changing this newly carved beam for the rotten old one. This was stressful to watch (see video) but all done within one day.

With the old beam safely on the floor, villagers were keenly gathering around, expectantly hoping this antique maple beam would be cut into pieces they could use for firewood. I of course, was to disappoint them, hoping to re-use it in the house with visions of an antique maple bar top in my little English pub out in the countryside. Our design and architecture partners, anySCALE, had even loftier ambitions and rightly pointed out what a shame it would be to cut up such a mighty piece of wood. We trimmed the rotten joint and found the rest of the timber was completely fine. The cold amassed neighbours slowly shuffled out into the night, their coats covering scraps of wood they had stuffed into their overcoat pockets. Everyone pretended not to notice.

Mika, our lead designer at anySCALE talked us through his plan, and invited Carpenter Jiang to see his suggestion. We would trim and clean the beam, and use it as our new reception counter, with the original carvings exposed for all to see. We would need some heavy lifting and rolling to get it into place, and shaping so computers and phones wouldn’t roll off. Mika communicated this through his quick drawing hand on a scrap of plywood, and Master Jiang gave knowing nods and grunts between long, slow draws on his cigarette. His toolkit once again got to work – 70 year old men with axes, pulleys, cigarettes and tea. By the next morning, it sat upon it’s new home: a brick plinth, away from the wet and the termites forever.

Our new reception desk (left), with thanks to Mika (drawing right) & the team at anySCALE and of course Jiang Shifu.

The structure of the house is safe for the next few hundred years or more, and I enjoy thinking about future visitors, archaeologists or historians considering how an Englishman in a top hat and a Manx flag found their way into Hui wood sculpture, deep in the Wuyuan mountains.