Wuyuan is a county in modern Jiangxi province, Southern China. Historically, it was part of the Huizhou region, which prospered hugely when the capital, and money were brought South to Huangzhou. Local merchants moved away from their villages to make their fortune and send money back to their families who would build grand houses; think the Hamptons of Ming China, whilst the men worked in Ming Manhattan.

Less well known and touristed than the Anhui villages (also part of Huizhou) Wuyuan is a window into the majesty and grandeur of China’s glorious South. There is a saying 山高皇帝远 ‘the mountains are high and the emperor is far away’; the beating drum of imperial Beijing is a lifetime away from the the distinct culture of Southern China – a land of tea, learning and fabulous merchant wealth. Wuyuan’s hundreds of ancient villages are the best preserved examples of this lost time – some are rightly celebrated (Yan village, Likeng, Jiangwan, Xiaoqi, Huangling, Qingyuan). Many others are unknown and lie off the beaten path (but a cycle away from our front door…)

Wuyuan is lucky to lie in the heart of Southern China’s mountains – Sanqingshan, Huangshan, Dazhangshan – all are breath taking. The Chinese know Wuyuan for world class green teas, which should be savoured like a fine wine. April/May is the most popular season, because the Canola crop grown locally is in full bloom – a sea of yellow around each of the villages. One of the best way to experience these, is the ancient ‘yidao’ – stone paths up the mountains between each village used for hundreds of years.

Wuyuan is famed for having the most beautiful villages in China – come and see for yourself. 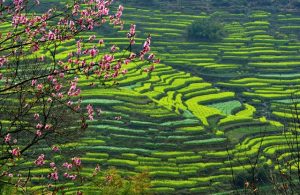 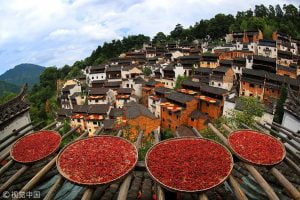 Wuyuan is a county of ancient villages in the Jiangxi countryside. We are located in Yan village, (Sixi Yancun scenic area) a protected 900 year old village which cars can not enter.

Wuyuan Rail: Taxis gather around the high speed railway station in Wuyuan town. It takes 25 minutes to reach the village. Wuyuan train station has direct trains to Beijing (7 hours) and Shanghai (3 hours) and Huangshan (22 mins) on the new high speed network. Ask us about arranging a car for you.

Find us on Google Maps!

In China, satellite view and map view are a few hundred meters out of alignment. We think this adds to the fun of living here. The exact location of the house on Google Maps, Satellite view is:  29.341083, 117.798280