I am English. I have a deep-rooted respect for the archaic pleasures of rolling fields, muddy walking boots, wet dogs and beers by the fire afterwards. There is little that can’t be solved by a long walk and a think. I may have judged the character of strangers before by how weather beaten their walking boots are. Us Brits are spoiled for choice going for a walk, with public footpaths, Ordinance Survey maps, broadly obliging farmers and a preponderance of pubs and wet dogs.

China, despite all its promise, often fails to deliver for the enthusiastic rambler. Outside of China’s bustling metropolises, the countryside can feel too cut off, dirty and lacking in pretty villages and pathways. Pubs in particular, are hard to come by. We are working to remedy this situation by running our own, with a roaring fire, antique maple countertop and enough booze to down an elephant. One of the reasons we chose Wuyuan to call our home however, is the endless web of ancient limestone trails and chocolate box villages they connect.

Figuring out where these paths lead, and committing them to paper has proven an excellent distraction over the quiet winter months.

In China, maps are a relatively alien and new concept so far as I can tell. With apologies for my crass over-simplification, I’ve never met a Chinese person who can use a map. The whole country seems to be navigated by an endless system of old ladies by roadsides being asked for directions. Responses are always vague and never include specifics:

For example ’turn left on GS2012 after 150 m, then take the third turn at the roundabout’

‘you go up this bit and then as it continues, you need to go around. Be sure to go on and its just there.’

This is a source of some disagreement in the Gawne household when we stop and ask a kindly old lady by the side of the road for her input. Selina, or Chinese family members, are generally quite satisfied with such instructions, and to be fair, a good 40% of the time they seem to get you to where you want to go. Another common issue is asking someone if ‘village A’ is indeed up ahead on the path, only to be told it is not. They have never heard of ‘village A’ and everything of worth is back the way we came.  If you do ignore these directions completely and push on though, village A will turn up 50m around the next bend. You get used to it after you’ve been here for a while.

Cars are still relatively new as a mass market product in China (eg past 20 years). Maps have historically been treated as closely guarded state secrets, as they would release to the world where the secret army bases are. Chinese children are not sent out into towns and fields with compasses and sheet maps for orienteering days or school map projects. The paper sheets or books we have in the West simply don’t exist here. I can imagine it would be quite a futile exercise for any mass survey/ publication of maps because so many new roads, housing estates or even entire cities would pop up in the time between survey to printing. In modern car journeys, people will take routes they know or use sat NAVs, loyally turning down whichever blind alley their digital companion sends them. This is interesting and different to what I’m used to. It does however, make walking routes particularly hard to pin down. 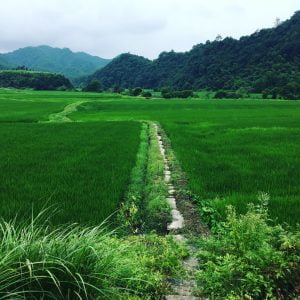 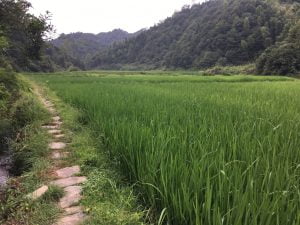 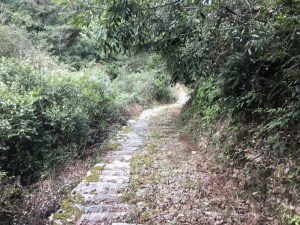 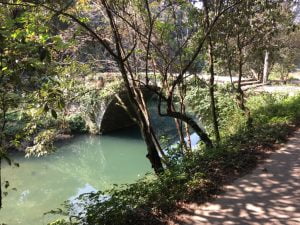 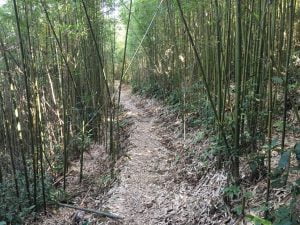 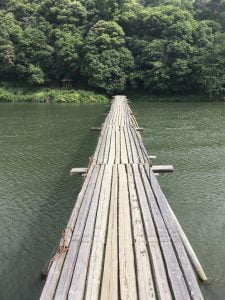 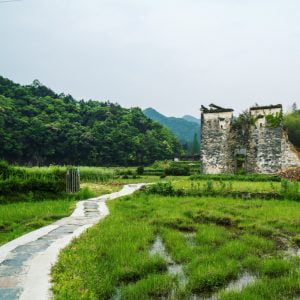 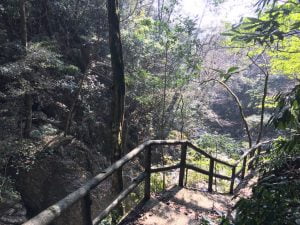 Compounding the situation, there is little interest in hiking among the locals, which at best is seen as a past time for crazy foreigners or rich Shanghai/Beijing types. The limestone pathways which connect the village are a constant reminder that Wuyuan is not like the big city. Money and development have not flooded these parts, and symbols of hardship – such as footpaths walked for miles at a time, in snow, sun and rain, day and night, to take children to school, collect corn and firewood – remain. People look forwards and up to the day when their family can afford a car and paved roads will come to the village.

For the enterprising rambler, there are untold riches to be found here: wild flowers blooming above centuries old hand carved limestone trails and booming ancient forests. They do, however, require a bit of exploring to be found. Luckily for guests at the Wuyuan Skywells – we have done this legwork for you. As these are previously unmapped areas, you are also very much leaving the tourist trail, and may encounter a few confused, but well-meaning looks from villagers who can count their lifetime encounters with outsiders on one hand. I have had a great time crashing around in the woods, enjoying quiet views over pristine rivers, idly chatting with young children who are meeting their first foreigner and relaxing with a beer at the end. I am particularly well suited to this, and happily push my way through dense bamboo, barbed wire fences and farmers who tell me ‘there is no pathway up ahead’. I’ve lost a few pairs of good shoes to paddy fields and Selina has become sick and tired of picking me up from the side of roads around the county with twigs in my hair, one shoe and mud all up one side of me after a particularly enthusiastic piece of orienteering. I am proud to say I now know the track and path network better than most of the villagers here in Yancun.

Committing this knowledge to paper for other people’s use is another matter entirely. It has come to my attention that my `B-‘ in art at primary school is wholly insufficient  for the task at hand. Drawing maps is actually quite hard.

Enter stage left: the professionals. Arias Jordens and Rachel Horton are both specialists in heading up in the hills, and coming back with a digital map. This requires a bit of digital trickery involving phones and GPS, third party map inputs, specialist computer software, well broken-in hiking boots and an explorer’s attitude. My guidance to them would generally include ‘go that way and find something interesting’. I would find them normally back in the bar at around 7pm with muddy boots, scratches on their face and beaming smiles. Not every day resulted in a route to follow. Some days they hunched over their computer, punching in the results of the days exploration. Other days, Selina myself and Snowy the dog joined them out on the trail.

At the end of their month with us, they shared the fruits of their labour; clear, concise professionally made maps with all of the dirt tracks and ancient trails marked on, streams, fields, photo spots and water breaks. I can tell you from experience that each route is exciting, varied and takes through Wuyuan’s quietest and most scenic spots.

My original vision of finding places to crash around and get lost in the Chinese wilderness realised, I can now also share this with our guests. Getting your hiking boots on China can be trickier than you may think – but here in our corner of Wuyuan we have everything you need, including the fire in the pub at the end to make a perfect hike.